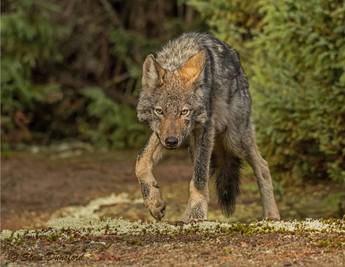 I like to keep myself up to date with papers coming out of the Trent university department I was working in over the summer and today I came across an interesting piece published in December 2018 on the population genomics and conservation status of the eastern wolf (Canis lycaon). Here is a link to the actual paper in case you want to give it a look over before reading my analysis.

As with a lot of papers published nowadays, particularly those within the conservation and ecological fields, this paper has more than one author, 12 in fact, from a range of research institutes across the Great Lakes and central Ontario regions of North America. Though the two principal authors, Drs Heppenheimer and Harrigan, are based out of Princeton and the University of California respectively, the scale of the study meant that data and analyses from a variety of research institutes were included.

I personally know two of the credited contributors through my work with the Ontario Ministry of Natural Resources (MNR) over the summer and had a number of interesting conversations regarding the conservation status of the eastern wolf, or Algonquin wolf as its more commonly known (I will expand on this headache below). Dr. Brent Patterson was, in fact, the researcher who gave me my internship- though he’s such a busy man that my total contact time with him over my 9 weeks was 15 minutes (see my post for more on that). His PhD student Tyler also contributed to this study, we didn’t really talk much about wolves as our main interactions were when he decided to bring rotting carcasses and anal gland secretions into the lab I was working in and leave them there. As such, our communication was generally through disgruntled glares from myself and the rest of the summer students and sheepish, amused grins from Tyler as he retreated from the lab to his desk away from the stench.

It’s quite strange reading a paper and knowing some of the scientists involved in the project, even stranger to consider that the wolf I captured in the field likely contributed to these data. Reading this, I felt my work had made a (VERY) small contribution to scientific knowledge and the work on wolf conservation.

What is an eastern wolf?

With the Canidae family being as inbred as the Targaryens, its easy to see how classifying species in this group could prove troublesome. The eastern wolf is no exception, there has been much dispute regarding the placement of the eastern wolf within the canid phylogenetic tree, a process complicated by the recent admixing with both gray wolves (Canis lupus) and coyotes (Canis latrans). The argument has typically centred on whether an ancient eastern wolf species existed that then interbred with coyotes and gray wolves or the eastern wolf is a hybrid species of the gray wolf and coyote (figure 1).

A 2006 paper authored by MNR scientists led the scientific community at large to support an ancient origin of the eastern wolf 3, followed by significant hybridization with other Canis species. It is this significant level of hybridization that has led to a species and conservation status discussion in the past 5 years, even if we accept that the ancient eastern wolf was distinct from the other ancient canids,  given that it has bred so much with coyotes and gray wolves over the past 24000 years, can we really call today’s specimens eastern wolves? The Ontario government made the decision to reclassify the modern eastern wolves found within their provincial parks Algonquin wolves after the provincial park where they largely reside. The Algonquin wolf is considered a descendant of the eastern wolf with various degrees of introgression from coyotes and gray wolves.

The term eastern wolf is still used in many circles, particularly in the USA, and Algonquin and eastern wolves are considered to be interchangeable. This study uses the term eastern wolf and aimed to establish whether there exists a set of genotypes specific to eastern wolves and the distribution of these genotypes in hybridized individuals across the landscape. Establishing whether eastern wolf populations are spatially and/or genetically distinct from their coyote and gray wolf counterparts enables scientists and lawmakers to precisely focus conservation methods to preserve both the numbers and genes of this threatened  Canis species.

What did the study do?

DNA was extracted from the blood or tissue of 304 canids across North America including 127 eastern Coyotes, 96 Great Lakes wolves (both hybrid species), 30 eastern wolves and 51 canids of unknown origin (figure 2). Even just eyeballing this map you can make some inferences about the distribution of canids in this region: the east is predominantly inhabited by eastern coyotes and the west by gray wolves leaving a small range inhabited by eastern wolves and unknown canids centrally.   Number 1 on the map (black circle) represents samples collected within the Algonquin Provincial Park and would be where my wolf contributed data. With such an isolated population surrounded by the ranges of other species, it’s not hard to see why this species is “threatened” according to the Ontario government.²

At this point, I think it is important to appreciate the man-hours that went into collecting DNA samples from 304 individuals.  I was in the field for 2 weeks straight with about 30 foothold traps working with a very experienced trapper and we only caught one individual, an individual, I might add, that had been caught before, meaning its DNA was already on file. My supervisors told me that it was not uncommon for teams to be out for over a month without capturing a single specimen or unheard of for DNA to be compromised. These 304 data points likely represent many years of fieldwork and hundreds of hours sat in a trailer waiting for something interesting to happen (click here for my first-hand experience of wolf trapping in Algonquin Park).

In order to compare the genetic information of different specimen, the researchers used 3067 neutral single nucleotide polymorphisms (SNPs). That is to say they analysed variation at 3067 sites not important for adaptive features (mutate at a set rate unaffected by evolutionary pressures), where there were only single base changes in sequences across individuals. These data could then be analysed using principal components that combine several correlated variables into one (its like thigh length and calf length being combined into leg length).

What did they find?

The results corroborated what the scientists thought going into the study, eastern wolves are genetically distinct from coyotes and grey wolves (figure 3). The principal component analysis yielded two important components, one which separated each of the three Canis species into their own genetic cluster (PC1) and a second that demonstrated that modern eastern wolf specimen possess genetic components unique to them (PC2). This analysis also revealed that the majority of the DNA found within specimen listed as “unknown canids” was coyote in origin suggesting a high level of expansion and breeding in this group- this could threaten efforts to preserve eastern wolf genotypes if this expansion behaviour significantly dilutes the eastern wolf DNA.

Once it was established that eastern wolves are genetically distinct from coyotes and grey wolves, it became possible to estimate the degree to which distinctive eastern wolf DNA is present in coyote and grey wolf specimen. For each site on which canids were sampled, the average membership to each genetic cluster (gray wolf, eastern wolf or coyote) was calculated (figure 3). This showed that specimen captured in Algonquin Provincial Park were the “purest” eastern wolf individuals, eastern wolf DNA is strongly expressed in some grey wolf sites expanding westwards suggesting that they may prove a refuge for this genetic information. There was less eastern wolf material found in coyote sites, making the expansion of coyotes westward a larger threat to the preservation of the eastern wolf.

Whether we call them Algonquin wolves or eastern wolves it is clear that they are spatially and genetically distinct from coyotes and grey wolves making them worthy preservation and protection.

Why does any of this matter?

It might seem that knowing if the eastern wolf is genetically different from a coyote or grey wolf is unimportant, but it can have serious conservation impacts. The coyote is not a protected species and can, therefore, be shot indiscriminately in many areas whereas the gray wolf holds protected species status in many regions.

There are some within the hunting community who accuse scientists of labeling any canid as a wolf in order to give it protected status. Establishing that the eastern wolf is not only not a coyote but is distinct even from gray wolves means that it can be considered an evolutionarily significant unit in its own right and can be offered additional protections based on its small and isolated population and vulnerability to introgression from coyotes and gray wolves.

This paper outlines the need for conservation focus on preserving not only the numbers of this threatened species by increasing the no-kill buffer zone around their provincial park territories but also the preservation of genetic integrity. Based on the average clustral membership map in figure 3, it appears that breeding with coyotes does not lead to the preservation of eastern wolf genotypes as often as when breeding with gray wolves  It may be necessary to reduce the opportunities for matings between eastern wolves and coyotes by the controlled culling of coyotes.

Though the Algonquin Provincial Park population is the largest, there is evidence of smaller populations spread across Ontario and into Quebec- connecting these populations through protected corridors and enforced no-kill buffer zones may be vital to this species’ survival. It’s time to connect the dots people!

Long story short…. the eastern wolf is a wolf but may not be around for long if we don’t do more to protect it. 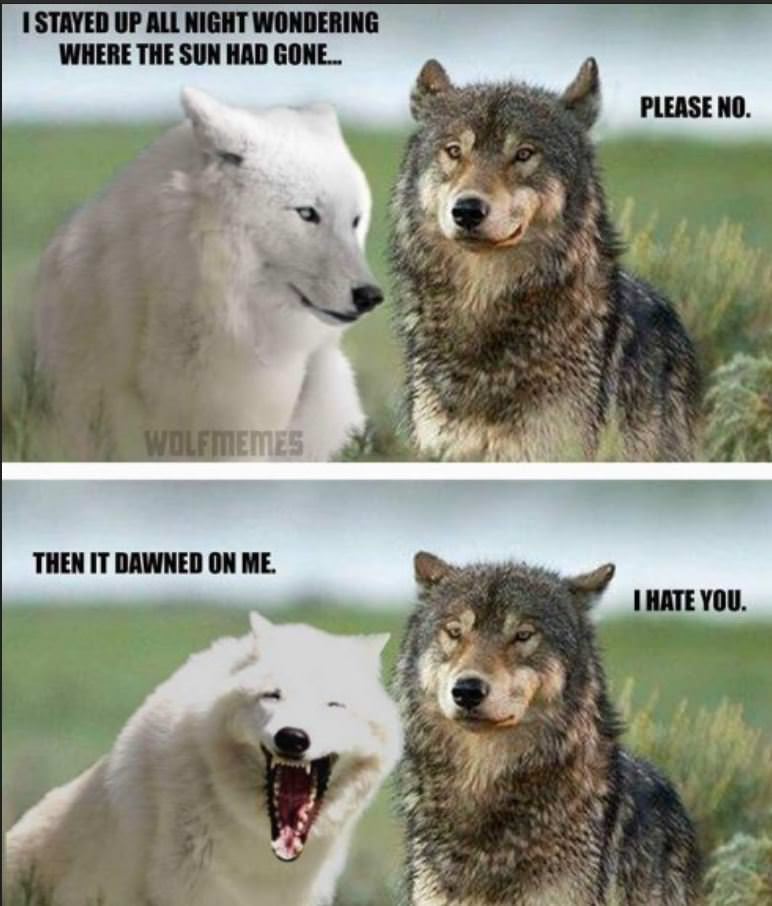